How to Build a Smokehouse 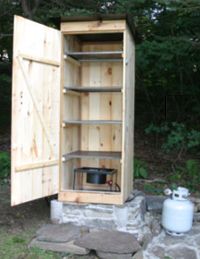 When I was a child smokehouses were still common. I remember going with my grandfather to cut some bacon, ham or sausage for my grandmother to cook for breakfast. The smell of the meat is ingrained into my memory. The smokehouse had wooden poles that reached across from one wall to another. Hanging from these poles were sides of bacon, hams and shoulders, and my favorite, links of pork sausage. The taste of these meats are also unforgettable.

The process of smoking meat to preserve it has been around thousands of years and only until the advent of freezers has it become less practiced. More’s the pity. What passes for smoked meats today are mere imitations compared to the delicacies I remember. Today the meat is injected with several different chemicals to try to replicate the old methods. Water is also injected to add moisture and weight. Artificial coloring is substituted for the hours of hanging in the smoke.

By building your own smokehouse you have total control over the finished product and the curing method is also of your own choice. The old way used salt to cover the meat until most of the moisture was gone and then the meat was placed in the smokehouse to remove the remainder. Hickory, oak, pecan and even peach was used for different smoke flavorings. The amount of time needed depended on the weather conditions which was usually as cold as possible to help keep the meat from spoiling.

Any small shed can be used as a smokehouse as long as the roof is sound and cracks in the wall are available for ventilation. I designed mine to resemble a two holer out house complete with a half moon on the door. The type of wood used doesn’t matter as long as it isn’t aromatic enough to transfer the smell to the meat. I used cypress because of it’s workability and longevity and because of the beautiful gray it weathers to. Pine and fir will also work as well.

With two by fours as studs and stringers run the boards up and down, leaving quarter inch crack in the wall to allow the smoke to escape slowly. A metal or wooden shingle roof gives the smokehouse more character than asphalt shingles and are not susceptible to excess heat which may cause melting of the synthetic material.

The smoke source can be located inside or outside the structure but I would recommend outside if possible. A small smoky fire made by a mixture of green and seasoned wood smouldering in the fire box will provide enough smoke and heat to dry out the meat without cooking it. A metal or brick container placed on the bare ground will work fine but a metal firebox located outside with a pipe connecting to the smoke house is easier to tend and is safer also.

Almost all of the old timers had their own methods and preferences for curing the meat and trial and error trying the different methods is the only way to find the one that suits your particular taste. If you know someone who still remembers a particular method this can be of enormous importance in deciding the process you choose. Different areas of the country and different ethnic groups had their own methods.

If you have access to fresh pork, a smokehouse can be something that not only furnishes great tasting meats, but is also a continuation of a thousands of years tradition. Being able to produce wonderful sausages for an inexpensive price is well worth the effort and is a matter of pride in your ancestors struggle to survive.